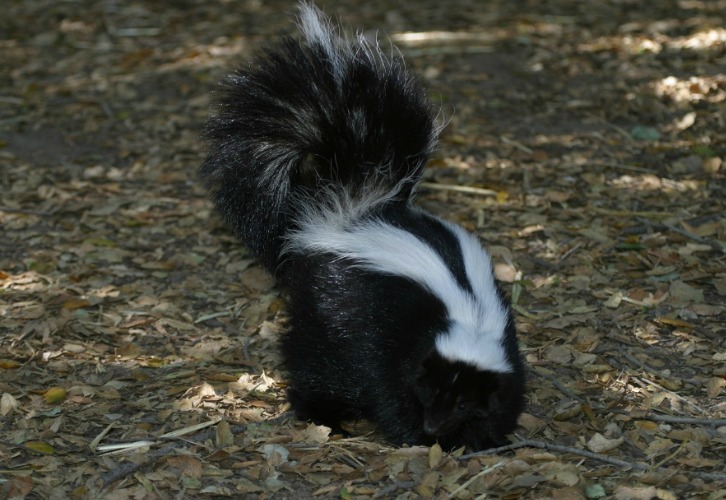 Wild animals can be very resourceful and fiercely independent, but sometimes, they need a human to lend them a hand.

Skunks are highly intelligent animals and also cute, but many people can’t get over the fact that they are a bit sensitive and won’t think twice before they spray you, even when you mean no harm to them.

Police Officer Merlin Taylor, was patrolling the streets of Rochester, Michigan when he saw in the middle of the road a skunk going around in circles with his head stuck in an empty yogurt container.

The officer could’ve laughed about it and kept going, but his sense of duty, even to a baby skunk, was stronger and he decided to stop and help the little stinker. He calmly put on a rubber glove and headed out to help him. He waited for the right time to quickly remove the empty yogurt container out of the skunk’s head and was fast to pull away before the animal figured out who he had to spray. He was likely too young to be able to spray anyone.

The skunk stuck around for a few more moments as to try to identify who had helped him and went about his way. Officer Taylor has certainly become the skunk’s hero!

The police department decided to share the dashcam video of the fortunate encounter so others could laugh as much as they did.

The Department was happy Officer Taylor was able to help the skunk and Sgt. Mark Lyon with the Rochester Police Department said to The Detroit News, ”I don’t know what we could award him for besides quick moves. He’s a good sport. We all had a good laugh, it’s nice he was able to get there to help.”

His actions took courage and compassion and the residents of the city of Rochester are lucky to have someone like him serving the community.

It is not the first time Officer Taylor had the opportunity to help an animal in distress. The police department shared a picture of the officer rescuing ducklings from a storm drain.

Watch the rescue video below and let us know what you think.

A police officer never knows what the day will bring. Officer Taylor was called to the 400 block of W. Third St. this morning for a baby skunk with its head stuck in an empty yogurt container. Luckily baby skunks can't spray like adults! Well done Officer Taylor!